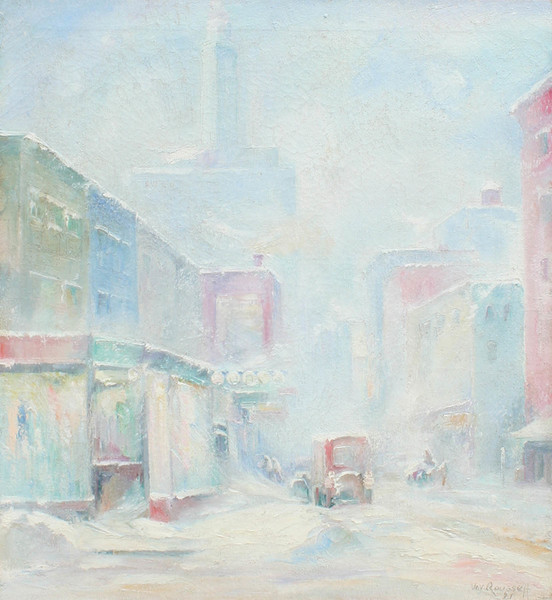 “The Twenty-fifth Annual Exhibition by Artists of Chicago and Vicinity”, The Art Institute of Chicago, Chicago, IL, January 25-February 28, 1921, #270.

Vladimir Rousseff was born in Sillistria, Bulgaria in 1890. He persuaded his father to give him 1000 Francs for the voyage to America and arrived here in 1911, whereupon he adopted the Americanized name of Walter. His desire upon his arrival in the U.S. was to become an artist, but he found himself mired in numerous menial jobs such as a dishwasher, cigar store clerk and peddler. Rousseff finally saved the $60, so he could enroll in evening classes the Art Institute of Chicago, where he studied with Albert H. Krehbiel. Rousseff won the prestigious Logan Prize in 1929. He also met his first wife Minnie Hansen at the Art Institute of Chicago in 1922. Tragedy struck in 1935, when Minnie died in childbirth.

Rousseff retreated to Fish Creek, WI where during this time he painted WPA murals in post-offices in Iron Mountain, MI (1938), Kaukauna, WI (1938) and Edgerton, WI (1941). In the mid-1940s, Rousseff was a professor of art at Monticello College in Alton, IL.