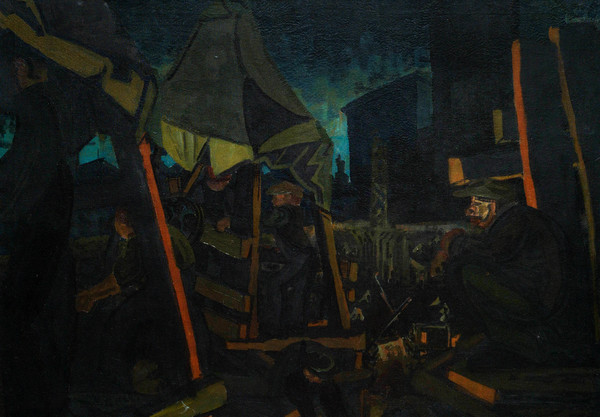 Vinol Mathias Seth Hannell was born in Negaunee, MI, but left the United States when he was a year old, returning with his family to their native Finland.  Hannell remained in Finland until he was 15 and attended the Academy of Fine Arts in Abo, Finland.  After his service in the U.S. Navy Medical Corps during WWI, he attended the Art Institute of Chicago. There, Hannell studied with artists George Bellows and Randall Davey, who shaped his interests and technique. In 1923, Hannell married fellow student and artist Hazel Johnson and the two became involved in the Bohemian aspect of Modern art community in Chicago. They even lived at Jane Adam’s Hull House, providing capital for and setting up the Hull House Kilns and gift shop. The couple created tableware that was sold on commission in the Hull House gift shop to benefit the organization. Hannell exhibited frequently with the Avant-Garde No-Jury Society of Artists, becoming the president of the group in the early 1930s. Along with close friends and fellow artists Frances Strain, Fred Biesel, Emil Armin, Frances Foy and Gustaf Dahlstrom, the Hannells formed the group called “10 Artists of Chicago”. Hannell created a WPA mural for the Women’s Athletic Club of Chicago and he and his wife designed the interior of the “Victor Vienna Café” at the Century of Progress Exhibition in 1933-34. He exhibited at the Art Institute of Chicago, the Brooklyn Museum and the Whitney Museum, New York, NY, among others. Hannell’s work can be found in the collections of the Art Institute of Chicago and the Brauer Museum of Art, Valparaiso, IN. He is best known for his American Scene imagery, although later in life he concentrated on sculpture. The Hannells moved from the south side of Chicago to Furnessville, IN during the 1930s and maintained a studio in Chesterton, IN, where they ran a pottery business. He died in Chicago in 1964