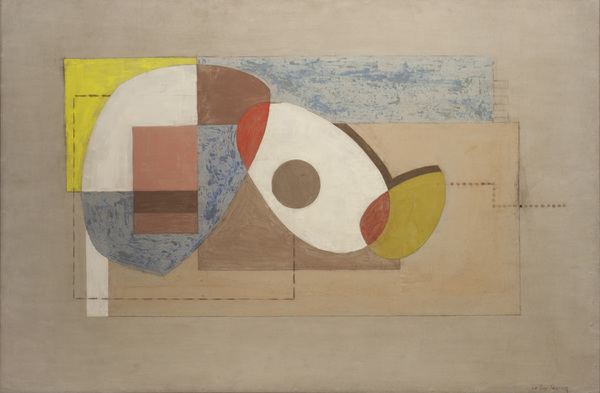 R. Leroy Turner is recognized for his vibrant Modern abstractions completed from the late 1920s through the early 1950s. His artwork emphasizes a lyrical form of Cubism, often inspired by visual interpretations of classical music. Many of his compositions are titled after specific pieces of music, and frequently they include themes of melodic symbols, devices and musical scores.

Born in Sherwood, ND in 1905, Turner spent much of his childhood living in Minnesota. In Minneapolis, LeRoy Turner studied painting at the University of Minnesota with the noted artists and instructors, Cameron Booth and Edmund Kinzinger. Towards the late 1920s, Turner became highly influenced by the paintings styles of Pablo Picasso, Georges Braque, Juan Gris, and Paul Klee. In 1928 he traveled to Europe to further his art studies in Munich and Paris. While painting in Europe he continued his association with both instructors Booth and Kinzinger. Returning to the United States, Turner joined the faculty of the St. Paul School of Art in St Paul, MN, where he became a painting instructor from 1933 to 1936. In 1935, to favored reviews, Turner exhibited his abstract paintings at a one-man show at the Nash-Conley Galleries in Minneapolis.

In 1936, Turner and fellow artist Alexander Corazzo joined the prestigious European avant-garde painting group, Abstraction-Création. Founded in Paris in 1931 to counteract the rise of Surrealism, this influential organization of painters and sculptors, which included Piet Mondrian, Jean Arp and Albert Gleizes, among others, aimed to promote the concepts of Modern geometric, non-figurative abstract painting. The group emphasized a synthesis of formal line, color and purity, incorporating the concepts of non-objective painting, Cubism and abstraction. Turner and Corazzo were two of a very select number of American artists accepted into the group, which also included Alexander Calder and Carl Holty. Turner exhibited with Abstraction-Création, which included two paintings in 1936, showing under the single name “Leroy”.

Leroy Turner suffered from chronic poor health through much of his adult life. While many of his American colleagues from Abstraction-Création, such as Calder, Holty and Corazzo, continued to exhibit and travel extensively, Turner returned to Minneapolis to become a full-time art instructor and administrator. From 1936-1948 Tuner became a respected teacher of painting at the University of Minnesota. During the Second World War, from 1940-1942, he served as the Assistant Director at the Walker Art Center in Minneapolis. Later in his life he became a painting and sculpture instructor at the Stillwater Art Colony in Minnesota from 1938-1950. Turner died in 1957 in Stillwater, MN at the age of 52.