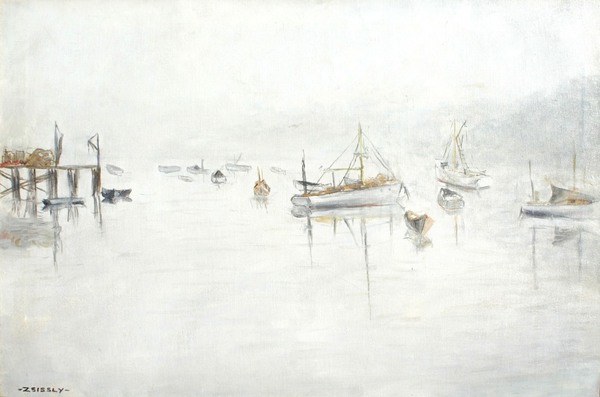 Malvin Marr Albright was born in Chicago in 1897, the identical twin of artist Ivan Albright. Their father was the notable artist Adam Le Lorraine Albright. In 1930, Malvin took on the pen-name of Zsissly, as Adam Albright wanted his sons represented at both ends of the exhibition catalogues. Beginning in 1950, he returned to using his given name on his artwork. Malvin studied at the Art Institute of Chicago, Chicago, IL, the University of Illinois, the Pennsylvania Academy of Fine Arts, Philadelphia PA and the Beaux Arts Institute of Design in New York. Later in life, Albright turned primarily to sculpture. Although he won many prizes, including those at the Art Institute of Chicago, Chicago, IL, the Pennsylvania Academy, Philadelphia, PA, the Carnegie Institute, Pittsburgh, PA, the Corcoran Gallery, Washington, D.C. and even the Annual prize at the National Academy of Design in New York, NY in 1948, he always took a back seat to his brother Ivan, who became world-famous for painting the actual portrait used in the 1945 movie “The Picture of Dorian Gray”. The Albright twins each created paintings for the film, but Ivan’s portrait of the decrepit Dorian Gray was chosen and Malvin’s portrait of the young and handsome Dorian Gray was rejected in favor of artist Henrique Medina. His work can be found in the collections of Pennsylvania academy, Philadelphia, PA and the Butler Institute of American art, Youngstown, OH, among others. He died in Ft. Lauderdale, FL in 1983.