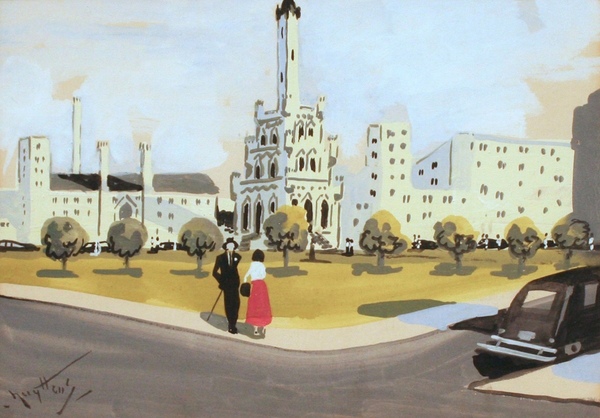 (Josef (Pierre) Nuyttens was born in Antwerp, Belgium in 1885. He studied at the Antwerp Royal Academy and at the Ecole des Beaux Arts in Paris and then came to Chicago in 1905 to study at the Art Institute of Chicago. By the end of WWI, he was considered one of Belgium’s leading artists. He received a bronze medal from the Queen of Belgium and also the Chevalier of the Order of Leopold II. In 1911 and 1912, Nuyttens illustrated four L. Frank Baum books (Baum is best known for writing the Wizard of Oz), “The Flying Girl”, “The Flying Girl and her Chum”, “Phoebe Darling” and “Annabel”. By the mid-1920s, Nuyttens had immigrated to the United States, first living in New York and then settling in Chicago. He owned the predecessor to Chicago’s legendary night club, the Chez Paree. Nuytten’s called his club the Chez Pierre and sold it when he was pressured by gangsters to sell their bootleg liquor. In the 1930s, he designed sets and costumes for the Federal Theater Project. He exhibited at the Art Institute of Chicago 17 times between 1914-1918. During his lifetime, his artwork was exhibited at the White House, the Congressional Library, the New York Public Library, the Royal Palace in Brussels and the Illinois State House in Springfield, IL. In 1960, at the age of 83, he died in a house fire in Chicago that destroyed much of his artwork. His work can be found in the permanent collections of the Art Institute of Chicago and the National Portrait Gallery of the Smithsonian Institution, among others.