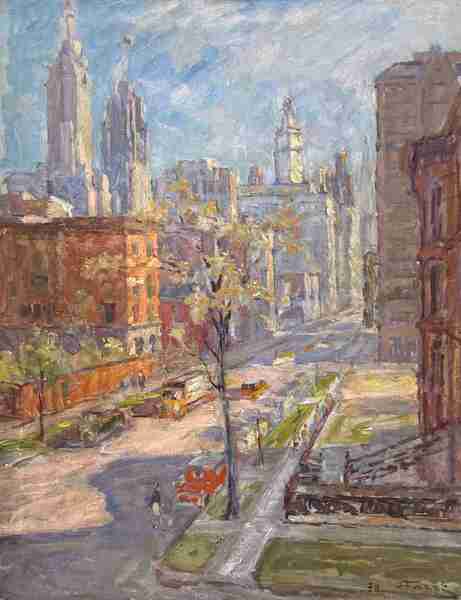 Henri Farre was born in Foix, France in 1871. He is best known for his paintings of WWI aerial battles. Farre flew in the cockpits along with the pilots of the famed Lafayette Escadrille, sketching the air battles as they were taking place. After the battles, Farre created finished, larger oil paintings based on these dogfight sketches. He was given the title of "Observateur Bombardier au Groupe d'Escadreille de Bombardment" by the French government and received the Legion of Honor and the Croix de Guerre from France for his war efforts. Farre wrote a book of his exploits called "Sky Fighters of France" in 1919. He exhibited at the Paris Salons and won a gold medal at the Salon des Artists Francais in 1934. In 1918, a large collection of Farre's aerial combat paintings was exhibited at the Art Institute of Chicago to benefit the children of the French aviators killed in action. The exhibition received a nationwide audience, traveling to major cities such as New York, Boston, Philadelphia and Washington D.C. Laurance Rockefeller, the noted philanthropist and businessman, purchased approximately 75 of these paintings, which are today in the Collection of the Smithsonian's National Air & Space Museum in Washington, D.C. Farre spent time in the U.S. before the Great War and returned to France upon the outbreak of war. After WWI, he settled in Chicago and maried an heiress, who was a 'modiste' (couturier), Marguerite Grassino. Farre lived and painted in Chicago until his death in 1934.