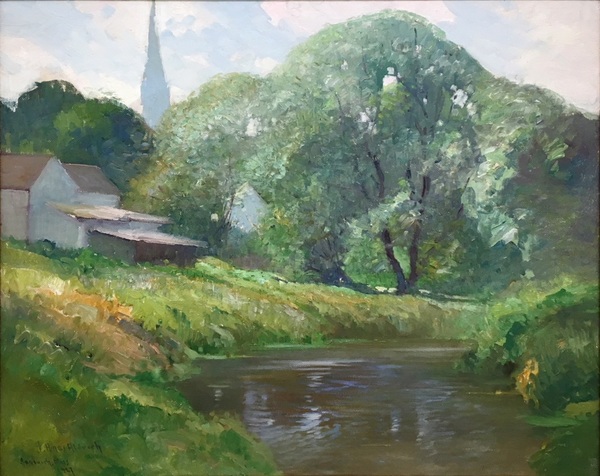 Born in Worcester, Massachusetts in 1872, George Ames Aldrich began his early training as an artist at the Art Student's League in New York. He continued his studies in Paris at the prestigious Académie Julian and Académie Colarossi, where he studied under the great masters James McNeill Whistler and Fritz Thaulow. In the 1890s, he worked as an illustrator for Punch Magazine and the London Times. In 1909 and 1910, Aldrich maintained a studio in Dieppe, where by Taulow's influence he was attracted to the quiet harbors and waterways of Brittany and Normandy. He returned to the United States at the time of he First World War where he applied his accomplished painting skills to interpret his native country. His favorite locals included the fishing village of Gloucester, Massachusetts and the rolling hillsides of rural Brown County, Indiana. Aldrich excelled at painting pastoral river landscapes and the reflection of light upon water. Occasionally he departed from these bucolic subjects to paint the steel mills of the Chicago area. These paintings, often large brooding industrial nocturnes, are executed in the gritty manner of the New York Ashcan School and are powerful commentaries of the American Industrial Revolution.

George Ames Aldrich was a prominent member of the Chicago Galleries Association as well as the Sociéte des Artistes Français. He gained national acclaim for his paintings exhibited at the annual exhibitions of the Art Institute of Chicago and at the Hoosier Salon. Today his work is held in the permanent collections of the Musée de Rouen, France,the Museum of Fine Arts of Houston, Texas, the Ball State Museum of Art, Muncie, Indiana and the Union League Club of Chicago, among others.