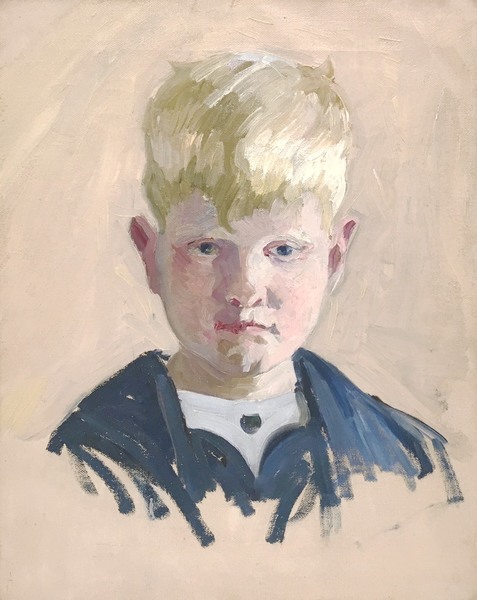 Frederick Frary Fursman was born in El Paso, Illinois in 1870. An accomplished painter and art instructor, Fursman is best recognized for his vibrant, colorful Fauvist paintings completed in the early decades of the Twentieth Century. In 1892, the artist created a mural depicting twenty-seven native Illinois grasses and grains that won the first prize at an agricultural exhibit at the Illinois State Fair that year. The mural went on to be exhibited at the 1893 World’s Columbian Exposition in Chicago, and traveled to expositions in St. Louis, Philadelphia and Paris. By the mid-1890s, Fursman had settled in Chicago and attended the Smith Academy for Art, a private art school. From 1901-1906, Fursman attended the Art Institute of Chicago and from 1906-1909, The Academie Julian in Paris. During this period in France, he executed many paintings of countryside of Brittany, particularly around the noted artist colony of Etaples. In 1909, Fursman exhibited at the Paris Salon. Fursman made a second trip to France to paint in Brittany from 1913-1914.

In the early 1890s, Fursman married Georgia Brown, a fellow artist from El Paso, Illinois, who unfortunately died of consumption in 1898. Their marriage produced a daughter Laurens Lucile in 1895, a noted painter in her own right. Fursman remarried In 1902 to Ida Luella Morton.

Frederick Fursman began a long and influential teaching career at the Art Institute of Chicago in 1909. In 1910, Fursman and fellow artist Walter Marshall Clute, established the noted Summer School of Painting in Saugatuck, Michigan (known today as the Ox-Bow School). The school was loosely modeled after the Smith Academy and the Academie Julian in Paris. Within its first years of existence, the the school became formally associated with the Art Institute of Chicago. In 1921, the school was renamed the Oxbow Summer School of Art. Fursman took the helm of the school after Clute’s death in 1915 and would remain the school’s director until his own death in 1943. From 1910-1921, Fursman also taught at the State Normal School of Fine and Applied Art in Milwaukee, WI. From 1925-1926, Fursman headed West to Colorado to become the director of the Chappel Art School in Denver.

Fursman’s paintings were exhibited widely, and he received numerous awards and prizes at the prestigious national annual exhibitions held at The Art Institute of Chicago, The Pennsylvania Academy, The Corcoran Gallery of Art, among others. At the Art Institute alone, Fursman exhibited thirty-four times between the years 1902 and 1939.

His work is included in the permanent collections of the Art Institute of Chicago, the Smithsonian Museum of Art, Washington, DC and the Toledo Museum of Art, among others. A retrospective on the artist was held at the University of Wisconsin Art Museum in Milwaukee in 1991. Fursman died in Saugatuck, Michigan in 1943.