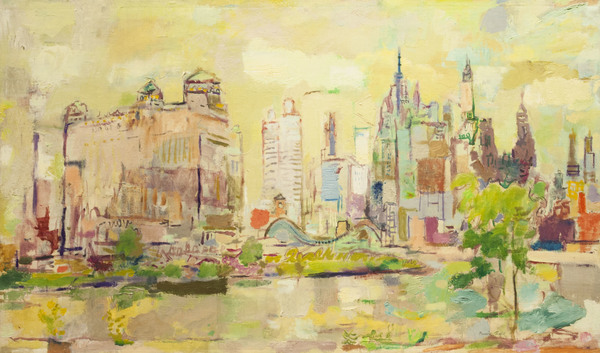 Francis Chapin, affectionately known as the “Dean of Chicago Painters” by his colleagues, was one of the city’s most popular and celebrated painters in his day. Born at the dawn of the 20th Century in Bristolville, Ohio, Chapin graduated from Washington & Jefferson College near Pittsburgh, Pennsylvania before enrolling at the Art Institute of Chicago in 1922. He would set down deep roots at the Art Institute of Chicago, exhibiting there over 31 times there between 1926 and 1951. In 1927 Chapin won the prestigious Bryan Lathrop Fellowship from the Art Institute – a prize that funded the artist’s yearlong trip to study in Europe. Upon his return to the United States, Chapin decided to remain in Chicago, noting the freedom Chicago artists had in developing independently of the pressure to conform to pre-existing molds (as was experienced by artists in New York, for example). Chapin became a popular instructor at the School of the Art Institute of Chicago, teaching there from 1929 to 1947 and at the Art Institute’s summer art school in Saugatuck, Michigan (called Ox-Bow) between 1934 – 1938 (he was the director of the school from 1941-1945). Chapin’s contemporaries among Chicago’s artists included such luminaries as Ivan Le Lorraine Albright, Edgar Miller, William S. Schwartz and Aaron Bohrod among others.

A prolific painter, Chapin produced numerous works while traveling in Mexico, France, Spain, Saugatuck and Martha’s Vineyard, where he frequently spent summers and taught at the Old Sculpin Gallery there. Chapin was best recognized for his dynamic and vibrant images of Chicago during the 1930s and '40s. Chapin was a resident of the city's Old Town neighborhood where he lived and kept his studio on Menomonee Street for many years. Described as a “colorful figure, nearly 6 feet 6 inches tall, and thin, and usually wearing tweeds”, it is easy to imagine Chapin at work observing the busy street life of the city.