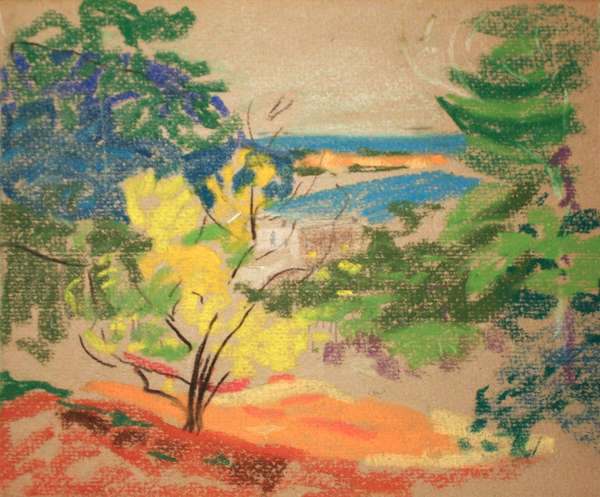 Albert Henry Krehbiel was born in Denmark, Iowa in 1873. Moving with his family to Newton, Kansas, in 1879, he spent his early years studying art at the School of Design and Painting in Topeka. There, in 1896, Krehbiel was discovered on a lecture tour by the director of the Art Institute of Chicago, William Merchant French, who encouraged the young artist to attend the Institute’s renowned art school. Krehbiel made the trek to Chicago by bicycle at the age of twenty four to enroll in the school’s fall semester. By his fifth year at the Art Institute, Albert Krehbiel had earned over 39 honorable mentions and received an appointment as an instructor in the regular day and evening classes. Krehbiel was awarded an American Traveling Scholarship by the Art Institute in 1902 to study in Europe. After visiting Holland, he moved to France to settle in a small studio on the left bank of Paris. Krehbiel enrolled in the prestigious Académie Julian in 1903 to study under the famed Neo-Classicist instructor Jean-Paul Laurens. While at the Académie, he won four gold medals for his work, the largest number ever given to to an American student. Krehbiel exhibited in other important annual Paris salons, including the American Art Association of Paris and the Salon des Artistes Français in 1905. In 1906, Krehbiel was awarded the coveted Prix de Rome, earning him a generous monetary prize and honored critical acclaim.

Flushed with his success in Europe, Krehbiel returned to America in late 1906 to enjoy three great developments in his life- a full time teaching position at the Art Institute of Chicago, marriage to fellow Art Institute classmate Dulah Evans, and a significant public mural commission. Krehbiel’s commission, executing the murals for the new Springfield, Illinois Supreme Court Building, was competitively earned over the submissions of twenty two other nationally acclaimed artists. The murals, grand allegorical scenes titled The Origin, Function and Continuity of Law, would be the last works Krehbiel completed in the Classical Academic style. By 1907, Krehbiel’s work, both personal and in teaching, espoused the painterly, plein-air style of Impressionism.

Albert Krehbiel was a devoted painting instructor, maintaining a full class schedule at the Art Institute of Chicago throughout much of the second decade of the twentieth century. In 1913, he additionally joined the faculty at the Armour Institute of Technology (later the Illinois Institute of Technology) as an instructor of architectural drawing. He continued to paint and exhibit his work at annual juried exhibitions, particularly those at the Art Institute of Chicago. Indeed, Krehbiel’s legacy is best manifested by his extensive exhibition record at the Art Institute, where he showed over thirty times from 1906 through 1939, including a one man show in 1922. Krehbiel’s painting by the middle teens maintained a fluid, naturalistic approach, capturing the immediacy of light, atmosphere and color of a specific moment in time. on.

In 1918 and 1919, Albert Krehbiel spent much of his summers traveling with his wife, Dulah, their young son, Evans, and wife’s sister, Mayetta, to an art colony in Santa Monica, California. There, both Dulah and Albert enjoyed painting the pristine light and radiant colors of the Southern California coastline. It was also at this time that the Krehbiels began their frequent travels to Santa Fe, New Mexico. Welcomed as an established painter, Albert Krehbiel thrived in Santa Fe. From 1920 through 1923, he became an exhibiting member of the Santa Fe Art Colony. In 1922 and 1923, Krehbiel was invited by the Museum of New Mexico to participate in its Visiting Artists Program. He was given a studio in the historic Palace of the Governors next to the famed Ashcan realist, Robert Henri. It was in Santa Fe that Krehbiel began his association with other notable Southwestern artists, including George Bellows, B.J.O. Nordfeldt, Gustave Baumann and Sheldon Parsons. The warm environs of New Mexico and California reaffirmed Krehbiel’s sensibilities as a colorist. His work continued to be defined by an open brushwork and bold, saturated color.

In the 1920s, Albert Krehbiel became a leading figure of the Chicago Art Institute Summer School of Painting (later named Ox-Bow) in Saugatuck, Michigan. The school, founded in 1910 by a group of Chicago artists led by Frederick Fursman, became a popular destination for artists and students throughout the Midwest. Krehbiel became an influential instructor at the school from 1926 through 1932. In 1934, he founded his own art school in Saugatuck, named The AK Studio. Much of Krehbiel’s artwork completed in Michigan throughout the 1920s and 30s is best expressed in his numerous pastels. Absorbed with his classes and teachings during the summer sessions, he often had little time to complete large canvasses. He enjoyed the freshness and portability of working with pastels. These works, frequently completed in early morning or late afternoon, often depict serene sunlit views of the Kalamazoo River and the rolling landscape surrounding Saugatuck.

While teaching at the Art Institute of Chicago during the fall, winter and early spring months, Albert Krehbiel often enjoyed painting the environs of his studio in rural Park Ridge, Illinois. His views of the Des Plaines River and surrounding countryside represent some of his finest achievements. Frequently these works are quiet winter landscapes. These landscapes, contemplative works achieving a high degree of light within a limited range of color, espouse a careful, mediative technique emphasizing the transitory effects of winter daylight. According to the artist’s family, from 1912 through 1930, Albert Krehbiel was often known to leave his Park Ridge home on a freezing cold morning, not returning until the end of the day with a group of freshly painted landscapes.

Albert Krehbiel continued to embrace and experiment with different styles of painting until late in his life. Throughout the 1930s and early 40s, he completed numerous cubist and synchromist figure studies. These brightly rendered, angular compositions were taken directly from the postures of models in his art classes. In a letter dating 1942 to his son, Evans, Krehbiel wrote “...I never thought of them as nudes, but simply as a power in organization”. These images express a lyrical naturalism, yet advance stylistically towards geometric abstraction.

Throughout his life, Albert Krehbiel remained a quiet man who had “little time for the mechanism of commercialism”. By the time of his death in 1945, he had amassed an extensive and extremely diverse collection of work reflecting his contribution to, and interpretation of the developments and stages of painting and drawing of the first half of the twentieth century. An esteemed figure within the artistic circles of Chicago, Saugatuck and Santa Fe, Krehbiel was an upstanding member of such organizations as the Cliff Dwellers of Chicago, Chicago Painters and Sculptors, Mural Painters of New York, and the Chicago Galleries Association, among others. Well established and exhibited in his lifetime, Krehbiel’s legacy today deserves further re-examination for his contributions towards American painting. It is the intention of this exhibition to convey the historic importance and aesthetic merit of his work.