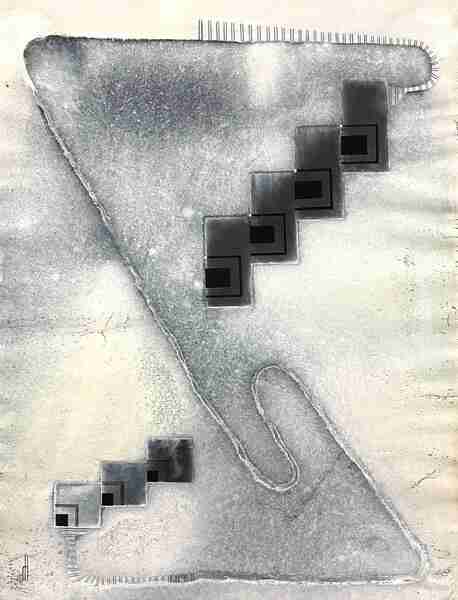 Marguerite Hohenberg was born Marguerite Kurtz in Vienna, Austria in 1883. When she was six years old, Hohenberg immigrated to the U.S. with her parents, first settling in Peoria, IL and then Chicago. Hohenberg studied at the University of Chicago and at the Chicago Academy of Fine Arts. She also traveled to Europe for further study. In 1904 she married Viennese aristocrat Arnold Hohenberg, who worked as a stockbroker in Chicago. Out of necessity during the Depression, Hohenberg opened her own interior design studio, but continued with art classes at the Art Institute of Chicago. She also took a modern architecture class at the Chicago Academy of Fine arts, where her instructor, Bruce Goff, was supportive of her becoming an Abstract painter. By 1937, she was represented by the important Roullier Galleries in Chicago. At the age of 60, in 1943, Hohenberg received a Guggenheim Fellowship. She exhibited at the Museum of Non-Objective Painting of the Solomon R. Guggenheim Foundation, New York, NY, the Art Institute of Chicago and the Illinois State Museum, among others. Her artwork can be found in the collections of the Art Institute of Chicago, Chicago, IL, The Solomon R. Guggenheim Museum, New York, NY and the de Young Museum of Art, San Francisco, CA. In the 1940s, Hohenberg was also a guest lecturer at the Art Institute of Chicago. After her husband’s death, she opened the Margurite Hohenberg Gallery on Oak Street in Chicago. She died in Chicago in 1972.