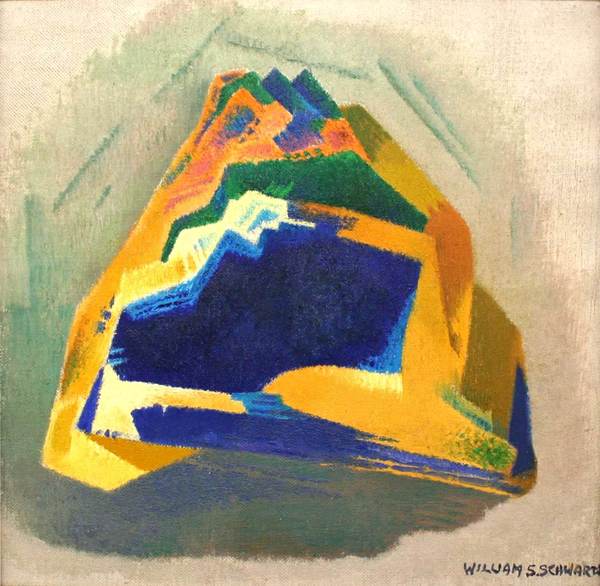 William S. Schwartz’s emigrated from Smorgen, Russia to New York city at the age of 16. He had already studied at the Vilna Art School from 1908-1912. At the age of 19, he won a scholarship to the Art Institute of Chicago. During his Art Institute tenure, Schwartz supported himself as a tenor, singing in vaudeville, radio and operatic venues. Proficient in both figurative and abstract forms of painting, his important "Symphonic Forms” series is among his most notable. The "Symphonic Forms" series was inspired from the artist's spiritual interpretations of classical music and poetry. Fourteen of his first “Symphonic Forms” paintings were exhibited at the Art Institute of Chicago in the acclaimed one-man show dedicated to William Schwartz in 1935. The show was even favorably reviewed by “Time Magazine”. Schwartz completed sixty-six canvases in his "Symphonic Forms" series during the years 1924 to 1967. According to the artist's log book, a document carefully compiled by Schwartz and his wife, Mona, each of these paintings were numbered consecutively and were never shown publicly until Schwartz's 1935 one-man Art Institute exhibition.